Cattle Care and Feeding: What You Should Know If You Like Beef

Growing up with cattle, Ryan Goodman got a good look first-hand at cattle care and feeding. But working cattle in half a dozen states and visiting ranches in the vast majority of the U.S., Ryan has had the chance to compare and contrast various environments and some of the things farmers and ranchers have to take into consideration.

The transcript for this episode about caring for cattle can be accessed here.

We talk with Ryan about the full spectrum of experiences he’s had in working with cattle and I have to tell you, it always makes me feel better to know the food I’m eating was produced by people who care about plants, animals and people. That’s clear whenever I talk with Ryan and then look at beef. It also isn’t missed that Ryan is an endurance runner and anyone who is fit enough to run a 100 mile race, must be doing something right with his nutrition. (Though he understands I question his sanity!)

Ryan is a big believer in learning as much as you can when you are in college and early in your career. That constant desire to learn and experience more has taken him on some amazing journeys. 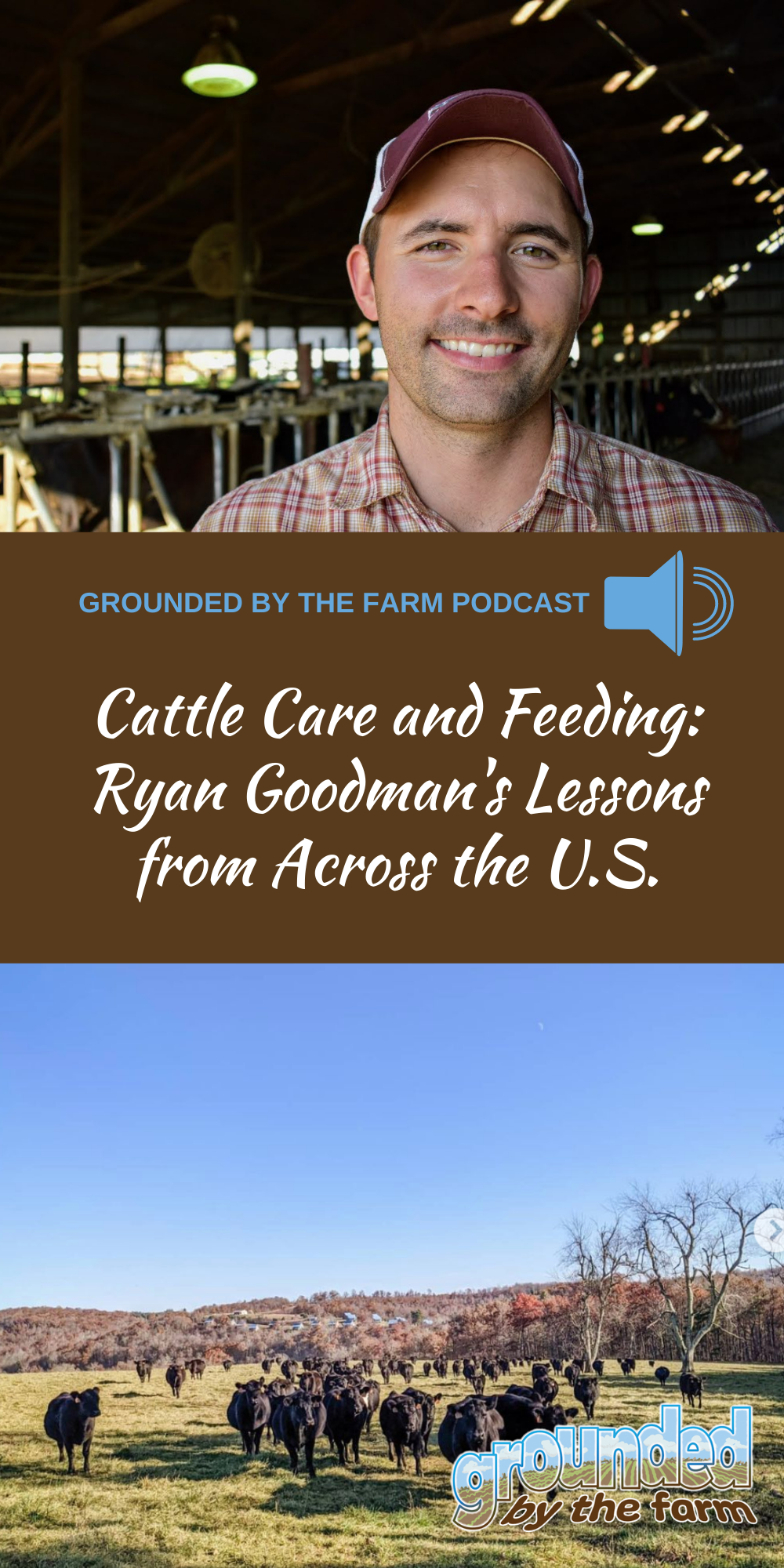 We recently sat down with Ryan in southern Virginia — his home since July to hear about the various places he has worked as well as some of the types of operations he’s worked with. Ryan’s lived in a lot of states, learning about cattle all the while. Since the conversation takes some turns, I thought a timeline may be helpful.

Ryan talks with us about his family’s running a ranch and livestock auction in Arkansas…. between the Mississippi River and the Ozark Mountains. He said the plentiful rain made growing grass so easy, that feeding cattle was a cinch! Growing up the family would take vacations to see other operations and it gave Ryan a wider view of the cattle business, one that would encourage him to learn a lot more through school and work.

The interest to learn more about livestock, especially focusing in on cattle nutrition and reproduction is what led Ryan to Oklahoma State University. His time in Stillwater also was punctuated by internships with operations in other states.

Time on a Picturesque Wyoming Ranch

I met Ryan via Twitter while he was in college and can remember the photos he would occasionally post on his blog or Twitter stream. People on horseback with incredible mountain views and small rivers running through valleys. Cattle dotting the view. He says the nature of ranching Wyoming is a total shift from what he was used to as cattle graze immense areas to find the grass they need.

Pretty sure the thought of a feedlot with lots of cattle is as far as I could have gone from the ranching life Ryan lived in Wyoming, but part of that is because I hadn’t visited one at the time and seen how they are managed. Appreciate Ryan talking to us about some of the things he learned about what cattle are fed and how they are managed. He even wrote a series of blog posts on feedlots.

His helping us understand the role of feedlots as a place that brings cattle together from lots of smaller farms & ranches as the beef cattle are nearing processing into beef is something that’s easily overlooked. Cattle are only in feedlots a short time, and while there, they have regular health checks and all. Diets are overseen by nutritionists to include all the kinds of fiber, calories and protein cattle need. This Instagram post Ryan did gives you some info as does our post that includes insight from a veterinarian on what cows eat and why.

Offering a depth of studies in animal science, University of Tennessee at Knoxville drew Ryan in for a master’s program where he studied reproductive health and the diets cows need to a level I get lost in. You can hear one of his talks on fetal development related to supplemental feeding in the video he posted. He worked with various farms in the state on his cattle care research too!

Ryan took a few years off the farm and ranch to work with cattle ranchers in Montana first and then throughout the US. He worked as a communicator, practicing a lot of the social media pieces he had worked on throughout college and grad school and married them with the in-depth knowledge he had built. These jobs gave Ryan a chance to meet beef producers in every state, many times helping each of them find their voice online to connect different audiences about how beef is produced.

More recently, Ryan has returned to the production side of agriculture, first spending a bit over a year as a herdsman with a Colorado ranch. Now he’s settled into his forever home as he got engaged to another Virginia beef producer. And the shift in those operations is big geographically and in terms of the natural landscape, but Ryan says the focus remains on care and feeding of livestock to provide healthy beef for our plates!

And I may be wrong, but it is every bit as picturesque as Wyoming! Ryan and Aaron live just off the Blue Ridge Parkway. When I was visiting, it seemed like half of the US was out looking at the fall leaves in the area!

Beef as A Part of a Balanced Diet

Ryan has gotten used to talking with people who have various diets for various reasons. He gets that people choose what to eat based on what they enjoy, their personal nutrition focuses as well as trying to make environmentally-responsible decisions.

And he’s like Meredith Bernard in that beef is a major portion of the protein in their diets. He says it’s not only what’s always available in the freezer and tasty, but he’s spent a lot of time talking with registered dietitians and other health professionals and knows how to use it as a part of a balanced diet. Not just a fan of meat and potatoes, Ryan may have a salad with beef or make street tacos or something.

Ryan is a regular on Instagram, sharing photos and video from the pasture or a barn as BeefRunner. And that’s the name he uses across platforms thanks to his love of both beef and endurance running. His website beefrunner.com includes posts answering questions like how many calves can a cow have or  what are cattle guards?

And you may have missed two episodes talking with Marybeth Feutz cattle farmer and veterinarian as we talked about how she cares for cattle as well as some of her tips on buying and cooking with beef.

2 comments on “Cattle Care and Feeding: What You Should Know If You Like Beef”