My family loves food and beef is one we seem to especially love. In our midst, we’ve got people who’ve worked in grocery stores, butcher shops, have gone to culinary school as well as some of us who just love food.

This episode of Grounded by the Farm takes a bit of a different path as Marybeth Feutz discusses beef and her Indiana cow-calf operation with us.

One of those differences was planned — rather than ask questions I had, I asked several millennial nieces and nephews to give me their questions and they loved making me ask questions that would make me feel awkward while also getting info they were interested in.

The other difference was far more awkward in that we somehow encountered a tech issue halfway through the interview that wasn’t caught til we were in editing. It’s a hard lesson learned but we’ll be fine with a two-part episode. 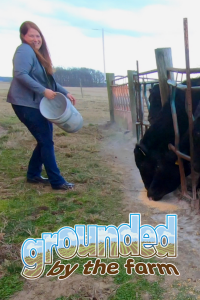 Marybeth grew up in the suburbs of New York City — West Milford, NJ to be exact. She met John while in vet school and eventually, he convinced her to marry him and call the midwest home.

She is a large animal vet whereas John works as a “mixed animal vet” meaning he can work on pets like chihuahuas or livestock. Marybeth says she likes working with horses the most.

They have a small herd of black Angus cows as we showed in the video earlier this week.

No doubt, my nephew will be thrilled with getting me to ask a farmer “What brand of ketchup do you recommend on a well-done steak?” Cause it started the interview off with the most awkward pause ever. I wish I had thought to get video. She ultimately said she was probably as red as the steak should be!

So I reworded it, asking how she recommends steak be cooked and why. She likes steaks medium rare whereas John want it to simply pass the flames to be as rare as possible! Then she explained that there are differences in how people and restaurants rate temperatures, etc so you really are best to ask for a cool red center.

The more you cook a steak, the more moisture it loses. That moisture is fat and that means you are also losing the flavor Marybeth explains. That dry, chewiness is part of the reason people may not like steak.

As for condiments, she says she will occasionally use something like A1 but usually if you have a good piece of meat and cook it right, you shouldn’t need condiments for flavor.

Marybeth usually uses the salt-pepper family of seasonings (sometimes lemon-pepper) and occasionally a rub. A few years ago she started using a compound butter, either purchased or homemade with some salt, herbs, etc. But compound butter is awesome whether you cook in cast iron or on the grill or whatever.

For the summer grilling season, Marybeth recommends ribeyes, t-bones or filets and says you want to look for some marbling in the meat as well as fat on the outsides. But she says the thickness of filets can be challenging for someone new to grilling so you may want to stay with the t-bone or ribeye. And since she likes a bone-in, she likes the cowboy cut ribeye. Boneless is fine too. She looks for consistent red coloring in the meat along with the marbling.

There are still asterisks on burgers on the menu frequently when it comes to temperature and Marybeth says those reflect USDA guidance for food safety.  She typically cooks burgers at home with a hint of pink or light brown throughout. She has a cheat magnet on the fridge that says it is 165 degrees.

Types of Cattle — Beef vs Dairy 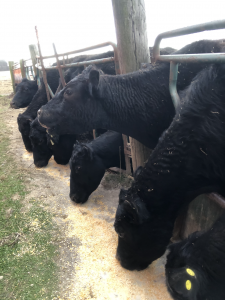 Marybeth says beef cattle are built strong, sturdy to just go out and have a good time a lot like Labrador retrievers in the dog world. But dairy cows are leaner, more focused on milk production — a bit more like greyhounds are for racing.

Because dairy cows are so good for milk, the types of food dairy cows gets need to be different. The energy required is different. Kind of like women need different things while pregnant and nursing. This is so important that many dairy farms hire nutritionists to supplement vet resources.

Beef cows are focused on muscle mass and having calves. That muscle mass is what becomes the meat we eat.

Dairy steers are an interesting difference though since the breeds tend to be thinner, lankier and yet dairy steers are raised for the beef since they aren’t milk producers. These cattle are tall and skinny, but rarely bulky enough to yield thick cut steaks, etc and are usually used for ground beef, she said. It doesn’t get the same marbling or volume. You may remember a previous post discussing blended burgers using mushrooms to infuse moisture.

All that discussion reminded me that cows isn’t the generic name for al of them, its cattle is the umbrella term.

In the video, Marybeth explained theirs is a cow-calf operation. Cows are the mommas and are focused on having & raising calves. The girls they have are called heifers until they have calves of their own. The boys are usually castrated becoming steers for the beef market although a few become bulls to keep the herds producing.

What’s an under appreciated cut of beef?

The most under appreciated cut of beef Marybeth says is the short-rib. They need to be braised, not a grilling cut. You cook those all day and get so amazingly tender. It’s a fattier cut and a bit tougher to start, but that connective tissue, when it is cooked out slowly becomes like butter. She certainly made me hungry just talking about it!

How much of the animal is wasted versus used?

Marybeth points out that in the cattle industry people talk about two different numbers — live weight and rail weight. The rail weight is what you have once you removed the rumen and the rest of the gastro-intestinal tract. There are some parts that really aren’t used for food for people. There is very little waste, probably less than 20 percent.

Next time on Grounded by the Farm, more of the conversation about beef with Marybeth.  If you want to add a question or two, please don’t hesitate to drop me a line!

Video of Marybeth talking about the cows, their feed, etc.

Marybeth’s blog My Fearless Kitchen and includes great posts about the foods she enjoys cooking with and shares some of the insight she has as a farmer and vet.