Fresh Mushrooms for the Middle of the Country 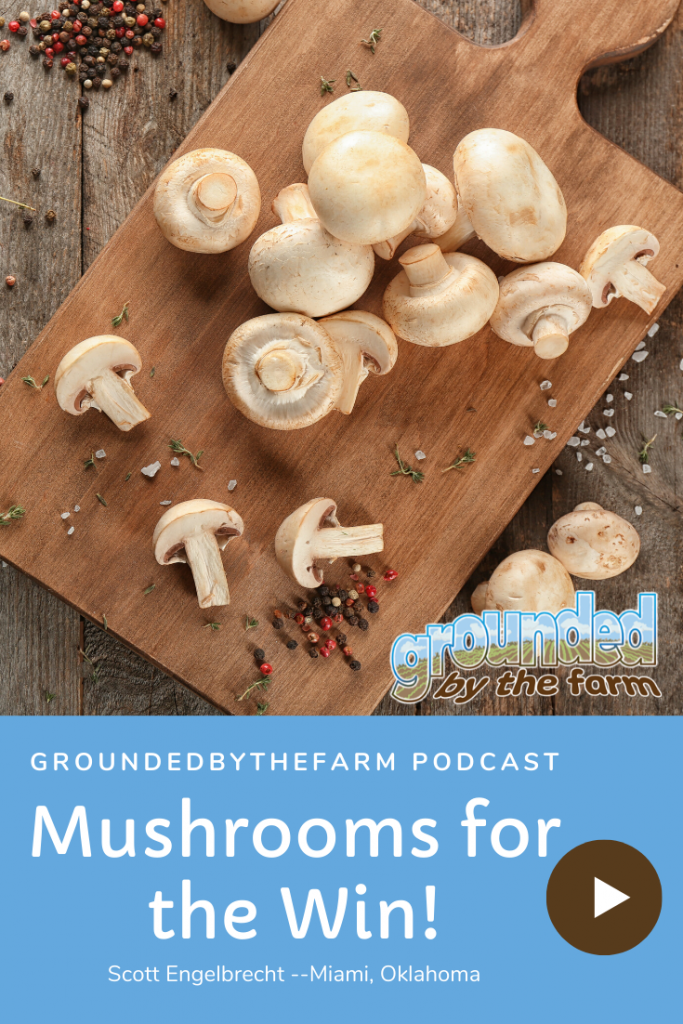 As a child, I remember mushrooms usually being in cans or bottles — never fresh mushrooms. But today most US farmers grow for the fresh market. It was a shift that really started in the 1970s and was a way for the US farmer to be a preferred source in the global fresh mushroom market. There is some cannery mushrooms. Those are usually mushrooms that don’t meet fresh standards usually. They are a byproduct, a way to use some now that may be wasted.
The company sells into both food service and retail (grocery stores, etc) throughout the region. About 25 percent of their business is retail. Located in northeastern Oklahoma, close to the Missouri & Arkansas lines, they go as far north as Cheyenne, Wyoming, as far west as Albuquerque, New Mexico and cover Texas, Arkansas, parts of Missouri. It’s a pretty good-sized market.
For the bulk customers, they ship in trays or boxes. And for retail, most prefer the small carton or till that is packed & shrink-wrapped by J-M before going out on a truck. They sell whole and sliced to both bulk and retail. I ended up catching some in a store while in Oklahoma visiting a college friend and had to take photos. I had brought a few bags of mushrooms from the farm so I didn’t need to buy anymore!

The typical white mushroom is generally called a button mushroom but it can be confusing call button is also the smaller size of mushroom. To be specific, the mushroom we see most frequently is the button white mushroom. J-M grows a lot of those but they also grow other mushrooms including brown ones that are called crimini or portabella depending on the size. The portabella is planted to enable it to grow to the five to six inches. Those are all agarigus mushrooms which means they grow in compost. 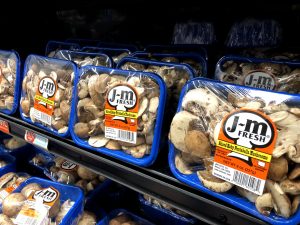 These mushrooms have gotten a lot of investment and that has helped make them easier to grow consistently that people will really enjoy. But there are other mushrooms that are getting more investment now too.
There are other kinds of mushrooms that like to grow on wood, especially hardwood so growing them is a little different. Shiitake are on the list of plans for J-M’s future. Scott says the company is investigating various exotic mushrooms and they watch adoption patterns on the coasts. And shiitake have definitely been gaining ground.
Morels are totally different. It is hard to grow commercially and Scott says lots have tried without finding the answer. Scott says he thinks the elusive nature of morels combined with the complexity of its growth will make it hard to do commercially. How much would people be willing to pay?

The Right Place for a Growing Family Business

A farm this size, got its start as Virgil Jurgensmeyer decided to leave his corporate job in St. Louis and branch out on his own in the 1970s. His three sons are running various parts of the business today as it continues to grow.
Miami, Oklahoma ended up being the right place. He looked for an area that had good transportation access, energy access, knowing that the middle of the country was underserved. The company started out growing 2 million pounds of mushrooms and has increased to 26-27 million pounds of mushrooms! With medium sized mushrooms, that would be 18-20 mushrooms per pound and everyone of those millions are hand-picked!
The business has been in Miami for 40 years and there are a lot of long-term employees. Growing the business has also meant a lot of hiring and looking longer term J-M knows that providing employees the type of environment that makes people choose J-M as the type of place they want to work, is an area of focus for Scott and the rest of the leadership team.

The idea of fungus being a safe food… it is something to wrap your mind around. But Scott explains growing fungus in a clean environment is critical to good mushroom production.
Growing the mushrooms in a controlled, indoor environment is a major piece of that, but mushroom farmers have also been pasteurizing compost. That helps make sure the bed produces the desired mushrooms and only that. It also kills E. coli, listeria and more which can happen.
There are also other practices, like having just one person touch the mushroom one time. The vast majority of the mushrooms are picked and placed directly into the container which it will be shipped in.

Since mushrooms are grown on compost, J-M has a recipe for compost that they make up in mass quantities. The put in ratios of carbon, nitrogen, and manage pH, water, etc. When you are composting, you are really just feeding microbes. They use wheat straw (mostly from within the 60-90 miles), chicken litter, cottonseed meal and gypsum which helps prevent sticking. Everything feeds the microbes, and the oxygen and water come in, the mushroom thrives on it. 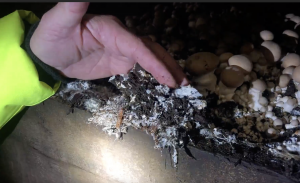 Making compost is the part of the process which can be most impacted by weather with rain, heat, cold, drought all impacting the recipe J-M uses.

The planting of mushrooms isn’t spores, but a mycelium attached to a grain like rye or millet. That grain provides the energy source to get the mushroom started.
Mushrooms don’t need light — so they are kept in rooms that don’t have a lot of light. Mushrooms do need moisture, oxygen, carbon and nitrogen. And a combination of microbes and nutrients, the combination of which remains more art than science. Lots of research has been done, but there is still a good bit to learn.
As the mushrooms grow, and oxygen needs to be brought in. And that can end up bringing in drier air, especially in winter. And making sure you get the humidity right means high energy use like other indoor agriculture.

There are lots of places to learn more about J-M Farms and the fresh mushrooms they produce!

5 comments on “Fresh Mushrooms for the Middle of the Country”