Having known Lauren Arbogast for a decade or so, I’ve had it on the list to visit her chicken farm for a long time. I knew I would find the right opportunity.

Little did I know that once I found a window with near perfect fall weather in Virginia’s Shenandoah Valley; I would get the farm tour, a podcast episode recorded AND enjoy a local harvest festival all three! 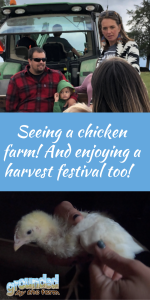 It’s strange to people I hadn’t ever been to a chicken farm. I mean, I’ve been to an egg farm like Dianne’s before and I’ve visited other who raise some broiler chickens but who’s farms had another primary focus. Having lived and traveled in the South so much, I’ve seen a lot of chicken houses from the outside and always wondered.

Lauren talks with us about chicken houses (I kept calling them barns out of habit!) explaining the family has several where they raise chicks from the day they break out of their shell til they are ready to be butchered and sent to grocery stores, and other customers.

Limiting access to the chicken houses are an important piece of biosecurity, which Lauren says is a big word that says they are focused on the chickens well-being and actively work to keep bacteria, diseases, etc from entering the barn. For my visit, that included a good scrub of bleach on the soles of shoes. You may remember Marcus Holtkotter talking about biosecurity in his pig barns in Germany and Dianne McComb talking about biosecurity for an egg farm.

The houses (you can see one in the video below) have systems that constantly monitor the temperature as well as food & water availability. An alarm can immediately alert the family to an issue. Even with the system there, people walk the barns several times a day doing visual checks of the chickens and systems.

Having a blend of generations, the Arbogasts have the benefit of both innovation and tradition. For instance, the family spent some of the time they were isolating due to the pandemic installing solar panels on their barns. They also look at ways to upcycle finding current uses for buildings that were no longer needed to something useful today and they get peanut hulls from farmers further south to use in the chicken houses.

She says they eat a lot of chicken too from my favorite — chicken biscuits for breakfast to the cast iron skillet full of chicken, veggies, carbs and yumminess that Lauren served for dinner.

A Harvest Festival Where You Meet the Meats

More frequently, I see farmers and small towns, doing neat festivals to get the community together. With the next generation of Arbogast kids starting their own meat market where the family sells beef, it seemed a great time to take people into the pasture to learn more about how beef is raised. And other farmers set up stalls with pumpkins, apples and flowers and some of the organizations put up tents to sell local favorites like apple dumplings!

The highlight for many was the hayride through the pasture talking about how the cattle are cared for, the way plants work with the environment and cattle as well as answer questions about the nice shacket she was wearing (which got a big laugh from Lauren).

Lauren enjoys sharing the farm’s story on social media. Give her a follow at lauren.arbogast on Instagram.

And the family’s meat shop can be found at: