Looking at beef, most of us see more than just the food on our plates. We frequently want to know how farmers caring for beef cattle, the ways cattle impact the environment and more. That got us to do a second interview with farmer and veterinarian Marybeth Feutz. The previous episode we talked steaks, burgers, types of cattle and animal use/waste.  And although she introduced us to her cattle and we talked about feed in the video, we wanted to go deeper.

My nieces & nephews helped me create a list of questions to ask Marybeth and several of the questions focused on caring for livestock.

Since one nephew told me he had noticed differences in animals that faced stress as he worked in a butcher shop, that was among the first topics. Marybeth says there are four things farmers do to minimize stress for the cattle they care for food, water, shelter and protection.

Marybeth did a great job of explaining how they feed their cows. Cattle are generally on pasture a large part of the year — they love grazing. It is easy to see that lack of food would provide stress on the animal and it’s health. Pasturing makes this pretty easy some times of year but you also have to consider the winter, etc and how much you need to supplement with feeding hay, etc.

The Feutz family has a few pastures, and each needs to have water easily available. Marybeth says a typical cow can drink 50 gallons pretty quick! It’s important to have good wells, keep an eye on pumps, deal with the challenge of freezing, etc.

With seasonal weather patterns, farmers look at how to keep cattle comfortable. While they generally like to be left alone in the herd, providing windbreaks for winter cold can be vital. And shade for summer high temps is also a focus. For farmers like the Feutz that have a small heard, the cattle may even have a shed available though they typically prefer to be outside unless it really is extreme.

Marybeth doesn’t pull punches as she talks about the damage predators can do. Whether you are talking about coyotes or black vultures, the potential for them to get a calf away from the herd would be painful. For the Feutz, keeping the cattle in a pasture close to the house with people and traffic, predators stay away. Many farmers have dogs that help protect the dogs and move them from place to place. 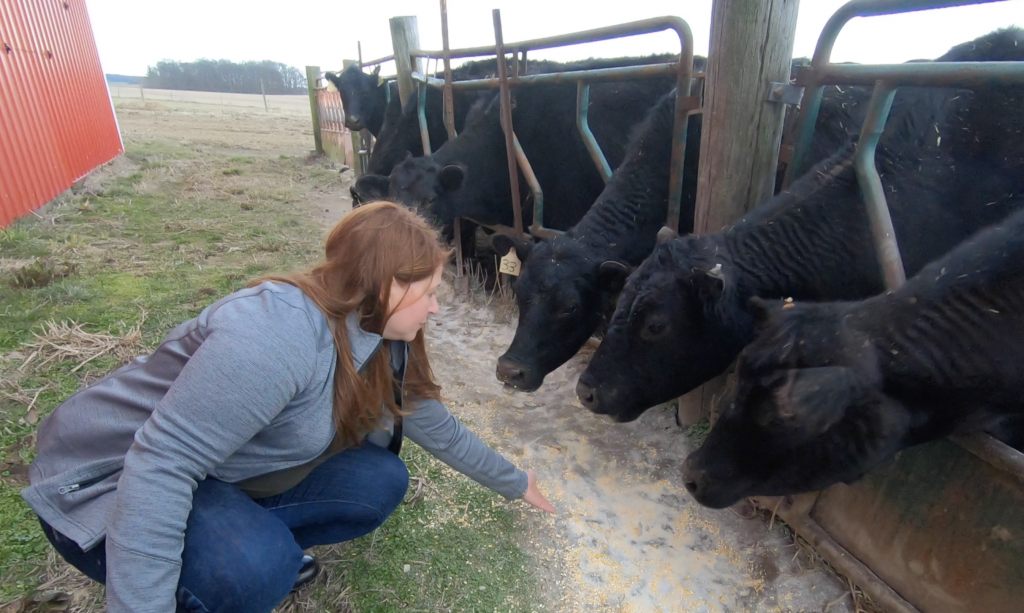 We discuss the health and care for beef cattle, how the decision differs from pets. Farmers need to weigh the animals potential recovery and quality of life which frequently is different than we have with pets. While we think of a broken leg as something simple, it can create intense issues for a cow and how the herd mentality and need to keep moving really makes recuperation near impossible.

And while I won’t lie, I’ve had flies or mosquitoes ruin a picnic or afternoon, the attraction of flies to cattle, manure, etc can mean overwhelming numbers. And those flies can carry diseases or bacteria. They can bother cattle so much that eventually the cattle avoid water or food, so, yeah that’s bad.

Vaccinations are important in cattle too and Marybeth says some of the primary vaccines given are for respiratory viruses. It’s pretty common for animals to have issues and they even have a few corona viruses that cattle can get — no worries though it isn’t the same or transferable from humans to animals or vice versa.

What’s the Deal with Veal? 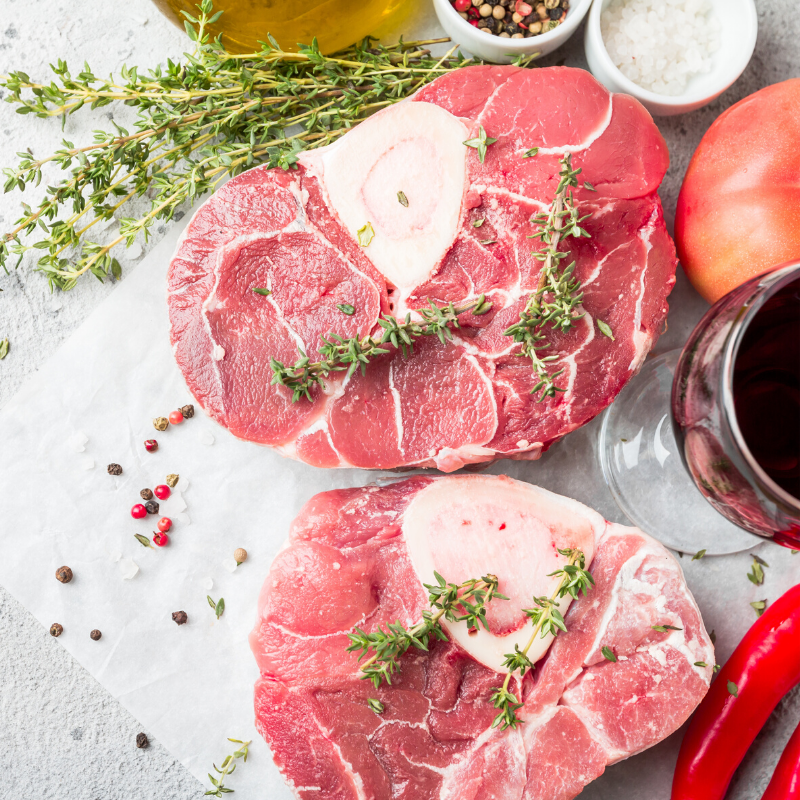 We got to talk a bit about veal production and how that works. Marybeth spent time in school outside of Boston and remembers a lot of people being against veal. I on the other hand lived in an Italian community in New York where veal was highly desirable. Both of us have heard things about animal care, but Marybeth’s opinion has changed as she’s met veal farmers and come to understand how they treat animals.

The meat is different for a couple of reasons 1) veal calves are raised on milk so the meat stays a light pink color and 2) the calves have smaller areas to walk around in and consequently don’t get as intense muscular build so even short ribs are more tender. She went on to explain why different cuts of meat on an animal may be more or less tender — think about filet mignon placement along the top of the back vs short ribs which are part of the core or the animal’s six-pack.

If you have heard anything about cattle and the environment, you have probably heard about methane from cow farts. Well, Marybeth clarifies that cattle release more of the methane from burps not cow farts. I can’t help but think that cow burps don’t sound as interesting to get someone to click or talk about the idea. The burps are methane releases from the fermentation process that naturally happens in the rumen — in fact, all fermentation puts out gas, you may remember that from our video from visiting Tennessee Brewworks. Marybeth says she frequently see information online can be incredibly misleading because animal agriculture has such a small impact on climate and carbon, especially when compared to the various pieces of the energy and transportation.

Since a lot of people are interested in going deeper, I thought you may be interested in some of the experts on sustainability and the impact of animal agriculture. Here are just a couple of the researchers I’ve met in this area:

The Feutz’s put in a new containment area & are using composted manure for the fertilizer it provides. She said it not only helps crops grow but managing manure is one piece of caring for beef cattle. They are using it on their farm, the family’s garden and are donating some to an educational farm nearby called Lyles Station lylesstation.com. Lyles Station was one of the first African American farming communities in the state and still runs a lot of programs to help children understand history, our food and more. Lyles Station is even marked as an Indiana Landmark!

We talk a bit about getting attached to cows and knowing when it is their time which is different in a cow-calf herd like the Feutz’s versus steers raised for beef. In a cow-calf operation, Marybeth explains that farmers have cows for 15 maybe even 20 years sometimes whereas raising steers is usual a year or a year and a half. She & the rest of the family are especially attached to Michelle who was born on inauguration day in 2009 along with a bull calf they named Barack. Michelle is a great mom and looks after other cows calves almost like day care. Marybeth knows it will be hard to lose Michelle, but also understands they are here for a purpose and need to serve the purposes they can.

Since nieces and nephews helped, one wanted to know about cowboy boots. Marybeth laughed saying she only has two pairs of cowboy boots. She usually wears knee-high rubber boots when she’s out in the field with livestock and Danskos when she’s in the office or hospital cause standing all day gets old fast in uncomfortable shoes. Her husband, like many farmers wears work boots like Red Wings. I find in too funny as I hadn’t had cowboy boots until I thought I earned them. I bought one pair when I first attended a national livestock show and again when I went to the Dakotas and worked cows by helping give calves vaccines one day and weaning calves at another farm later.

As if Marybeth isn’t busy enough with a farm and veterinary practice, she also has a food blog called My Fearless Kitchen where she shares simple recipes and tips for shopping. She and friends also have a Facebook group called Recipes from the Farm. Here are a few we talked about:

She also has a ground beef buyer’s guide that helps you think through the ground beef you want for tacos versus meatloaf, etc. And one post provides 79 recipes you can make with ground beef!

I also mentioned the instant pot beeping in the background as the red beans and rice I was making notified me it was time to eat!

Please note:  This was the first time to do an interview via web conference. I have a bit of a learning curve with this set up when it comes to audio. I plan to keep increasing the quality in the coming remote interviews as travel is curbed in light of the corona virus.