There have been a lot of things happening in America’s food system over the past few weeks and while we have talked about some elements in various episodes so far, the big picture still is a question for many. We have talked about a piece here or there and last week we had a great blog post by a family member of a local butcher shop discussing whether families like her could fill the latest problem.

This week we are focused on some of the pieces and trying to pull together the big picture of what’s happening with America’s food system. We discuss some of the various things we may be seeing in the day-to-day (at grocery stores, restaurants, and how farms are connected). We talk about dairy, meat, some of the baking supplies and more.

The format of this week’s show is a bit different — YouTuber Kay Johnson of Happy Trails Hiking to take a different spin on her live Foodie Friday show. This week’s podcast is the bulk of that interview and occasionally you will hear us as we respond to comments from the live audience. If you prefer to watch the video, here you go!  (And don’t forget to subscribe to the Grounded by the Farm YouTube Channel so you know when we post new videos.)

What are the major components of America’s food system?

In the past, we frequently talked about the food chain, but America’s food system is fairly complex. Even the way I access it as an individual is pretty complex. Some of the bigger pieces include farmers, food warehouses & distributors, grocery stores, restaurants, food/meat processors, consumers and in today’s environment many of us are accessing delivery services too.

While it is easy to group farmers as a whole, there are a lot of things happening on and to farms right now. Many are busy planting while others are harvesting crops they planted during winter. Some are tending livestock while others have livestock ready to sell. For most of us who aren’t from farm backgrounds, the spaces between farmers and us may seem unclear and quite frankly, farmers can also lose sight of some of the pieces too.

That said, farmers like most Americans, are facing some new challenges due to the COVID pandemic. The economic side of their work is less clear as some are facing dropping prices as the food supply system’s flexibility is being tested. And the weather doesn’t seem to understand the whole spring showers thing as people in some areas are getting too much rain, some are getting none and God help the people still getting significant snowfall!

One of the earliest challenges we saw in local grocery stores was with all the pre-schools & schools closed. Children would be home all week long. And families wanted more milk from the grocery than they usually bought. Stores had standing orders that had been tweaked over years if not decades and the supply chain was sending that number of gallons and half gallons, that amount of cheese, etc. And yet, schools, and the tiny individual-sized cartons stopped ordering. Facilities that were set up to pack milk one way, had the cartons on-hand for the typical uses and suddenly weren’t needing the milk from the farmers who usually supplied them. It takes a while for everyone to retool, and connect the new dots. In the meantime, dairy farmers had milk that wasn’t going to be making it to customers and had the heart-wrenching need to dump milk. 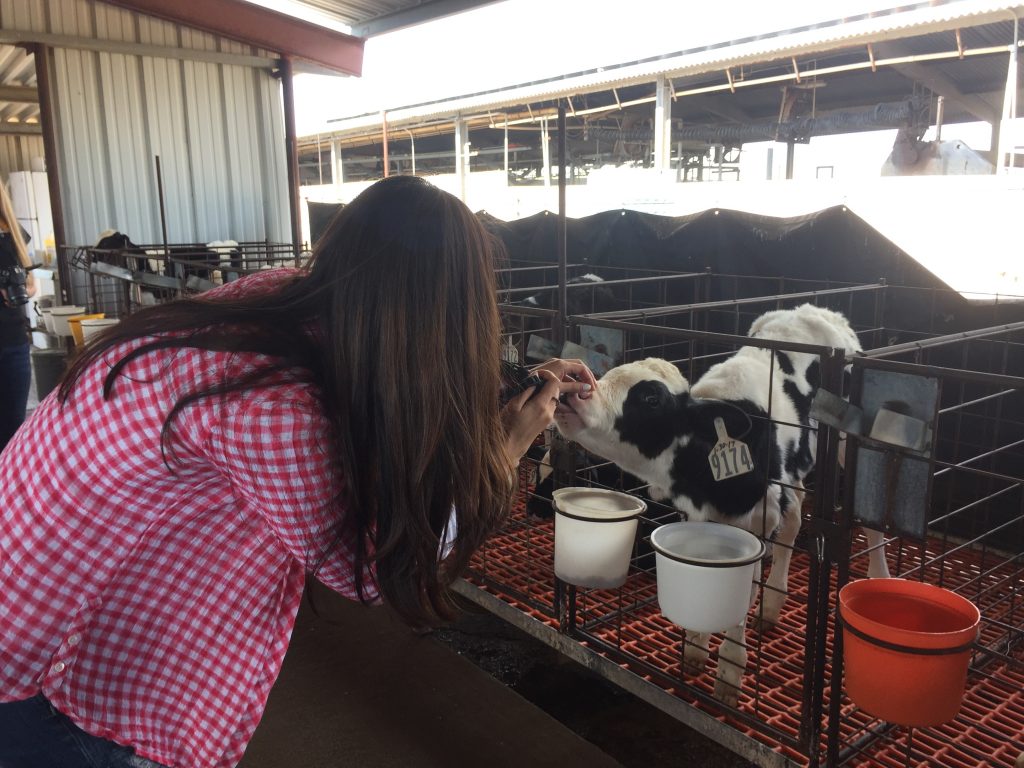 Meeting the calves at a friend’s dairy farm.

Most of us who live in metropolitan areas are seeing the stories about restaurants and many, like me, have family members directly impacted. Restaurants were closed early as the owners and public health officials both. saw the closeness of patrons, the lengthy conversations we love as potential spread, and more. But not as many of us had realized that the impact on us and our favorite chefs, wait staff and others was also impacting the farmers who had been selling to those places may not have product packaged for retail sale or connections into those parts of the supply chain.

But produce farmers felt the changes quickly and as we mentioned in the conversation with an avocado farmer, suddenly onion and potato farmers had product sitting in bins or the field. Strawberry farmers in Florida had to choose between paying people to harvest a crop they may not be able to sell and letting it rot in the fields.

As restaurants converted to contact-free curbside service and home meal kits, they have been able to generate a small portion of their revenue, but few restaurants anticipate normal traffic and service anytime soon, which means a lot of people who work in this sector will be out of work for sometime.

Now Concern is Raised about the Meat Supply

As essential employees continued working at the various processing and distribution companies in the food chain, a lot of companies were able to move more meat into grocery stores. There were bumps early on but those had smoothed out before processing plants began to face issues with employees needing to be quarantined at levels that meant some shifts or plants were being closed down. The worries of community spread in the small towns and cities that serve as home to these employees and facilities were important to recognize.

When we talked to Val Wagner about where her cattle go to be butchered, she explained most would go to a larger processing facility while a few would be locally processed by a butcher for family, etc.  That’s similar to the way Marybeth Feutz and other farmers work too. While it is probably too early to say, in agricultural circles it seems like processing may be returning to more normal levels but may be experiencing variability for a while. In the meantime, farmers are caring for beef cattle, pigs, etc for weeks maybe months after the original date scheduled to haul them for processing which can add to costs.

Spending Much More on Groceries

Looking at my personal expenditures and seeing how much I am spending at the grocery store, that number seems huge. Bigger grocery receipts than I’ve ever seen. And doing bigger shopping more frequently where I used to do small trips between. But in reality, my food spending is down without my eating at restaurants as frequently.

As we discussed in an earlier episode, home pantries needed refilling which led to shortages — but my goodness it led to some amazing baking at homes across the country. Meanwhile, small packets of yeast that we normally get are seemingly extinct but restaurant-sized pounds are available. Those 5 pound bags of flour proving elusive on grocery store shelves while you can get 25 or 50 pound bags delivered. 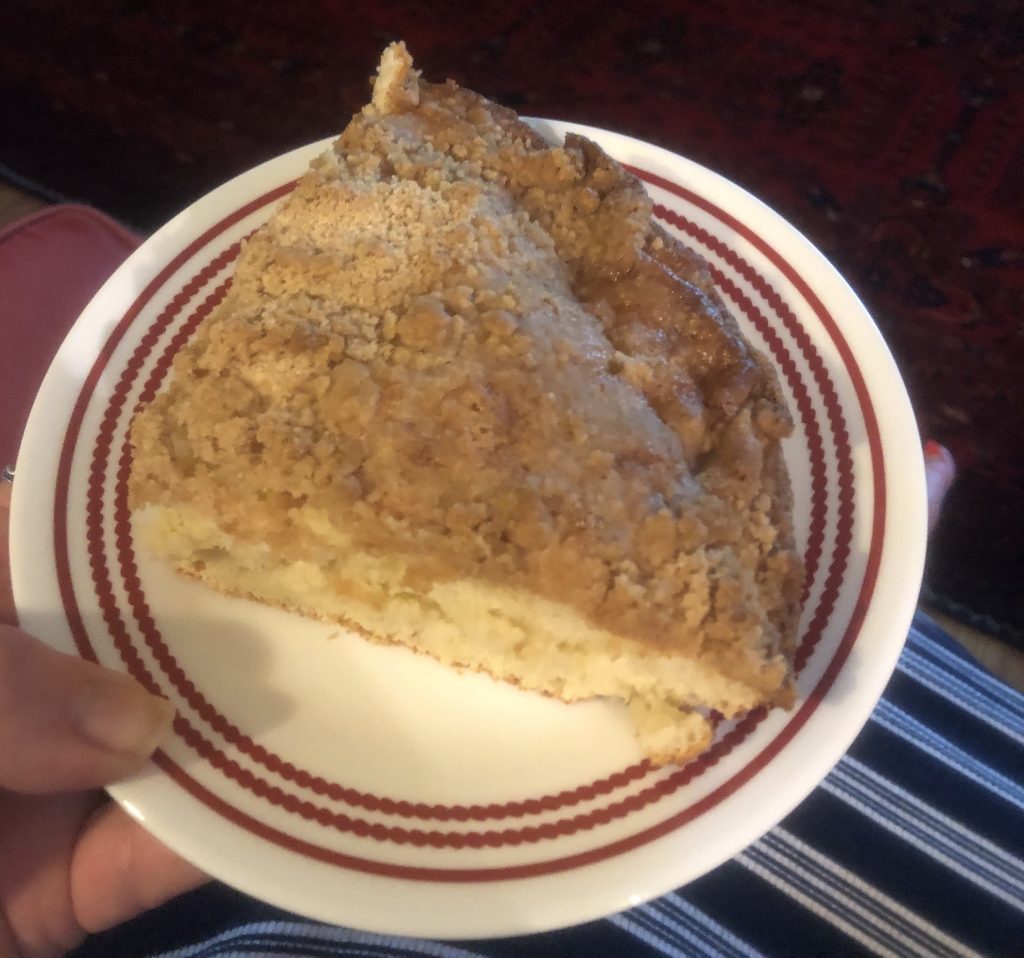 I’ve made my mom’s homemade coffee cake while in quarantine. What have you been cooking/baking?

The Food System — Adding It All Up

Our food system is more challenged than ever before, just like the rest of American life. And reality is, this is happening globally. Our system had the flexibility to handle local or regional catastrophes, like hurricanes, but something where demand suddenly ceases or expands in vast areas of the world? All at once? Nobody in the food system was prepared and like everyone else, the individuals in the food system are challenging themselves and the system to do better.

You may see farmers’ markets vendors offering pre-orders. There may be farmers who were selling to restaurants taking on more direct-to-home sales. The routines in the food system are no longer routine and some of us individually are choosing to garden or maybe get some chickens.

It helps me to think things through so I know I’m making good choices rather than simply a choice that feels good at the moment. Let’s hope individuals making those decisions helps us retool our food system into something more resilient, more flexible and more able to handle the unexpected the next time around. I know I’m trying to create that for myself. How about you? 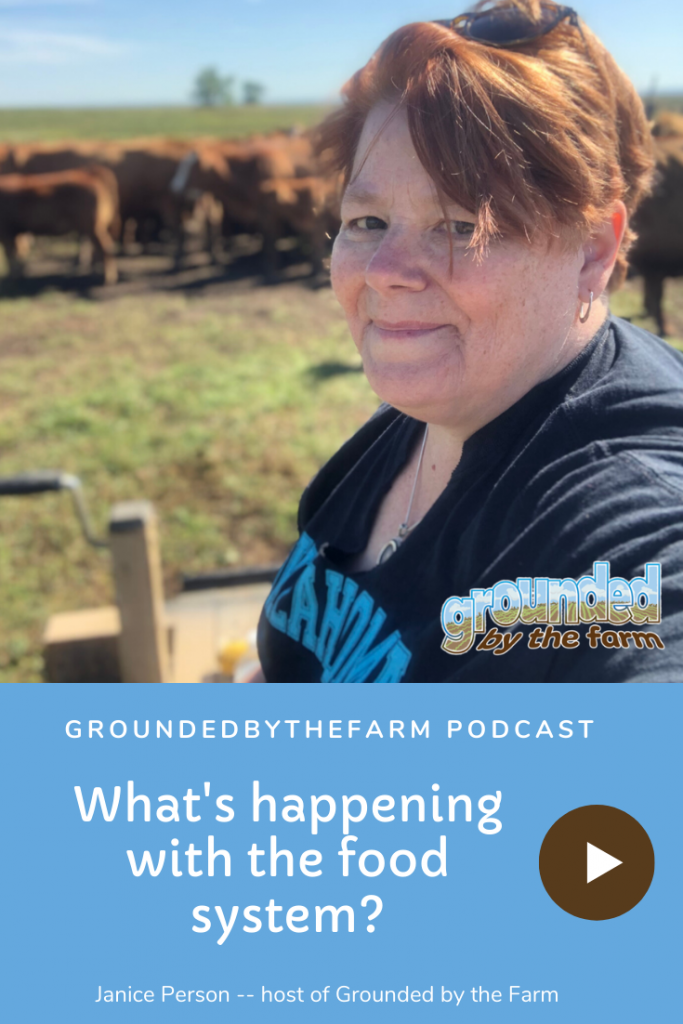