Getting a Whole New Perspective on Farming and on Life — An Irish Dairy Farmer Goes to Kenya!

Subscribe on Apple Podcasts Subscribe via RSS
Hearing Paula Hynes talk about her experiences of spending time with the Maasai people in Kenya offers a whole new perspective on farming. Paula, who has a dairy farm with her husband Peter in Ireland (remember we talked Kerrygold butter?), said the possibility came up so quick, she didn’t have time to really think things through. Her family immediately said she should do it though and she knew it was a once in a lifetime opportunity. Now she says it not only gave her a totally different perspective on farming, but on the world too. (The AI generated transcript is available here). 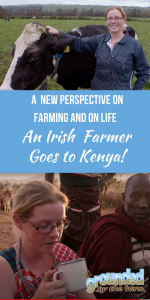 It sounds like the run up to a great bar joke, but – have YOU heard the one about the Irish dairy farmer who went to Kenya to visit The Maasai tribe, to learn about culture, agriculture and life? That’s the experience we talk with Paula Hynes about and it is definitely no laughing matter. It is the focus of the most-recent episode of Grounded By The Farm!

I’ve known the Hynes family for years and one of the most interesting facets of their lives has comes from the time in 2017 that Paula was fortunate enough to spend time with members of The Maasai people. This interaction came to the Hynes family after they’d been awarded The Farmer of the Year title in Ireland, when they were invited thanks to a TV production company who were planning to film a three-part documentary series called “The Hardest Harvest” and definitely wanted women to participate.  The series focused on the transplantation of a fisherman, forester and of course – a dairy farmer which ended up being Paula into remote parts of Africa. (Maybe next time someone can visit Ugandan fish farmer Kaahwa Jean!)

Have you heard of the Maasai tribe? Find out more about them now with these five fascinating facts about the Maasai people.

An interesting note: Paula had never traveled anywhere on her own – nowhere not even around Ireland. Now she was preparing to hurdle towards the cradle of humankind to be in a documentary focusing on farming. Quite the segue from the rich green rolling mounds of tall grass in Ireland to raise  pedigreed holsteins, jerseys and Fleckvieh heifers collect milk to be sure.  Paula says that the choice to go was a “no brainer” but the reality is – there was so much to think about not only before going but after.

The experience was amazing, and came as a complete surprise to Paula.  She laughs saying she had so much to do to get ready that she didn’t have time to  Google what or where she was going and in hindsight, that clearly fostered the choice to go. As a focus in contrast you see – there are no paved roads. There are no bathrooms. There are no showers.

If all of that wasn’t enough, the area was experiencing one of the most impactful droughts known to Kenyan history at the time. And the culture is very different. Whereas Paula and Peter work as a team of equals, the women of the Maasai tribe are treated much differently/lesser than most can imagine. There is a lot of water to be carried quite a distance and if a structure is to be built, the women will do that too.

And then there’s the wild animals. Hyenas. Elephants, and Zebra, oh my.

The living area was one large community that not only housed the people (men, women and AMAZING children), but all of the farm animals as well. The cows herding there would come into the compound at night to help stave off the likes of the wild animals. As Paula arrived she heard the glorious voices and music being generated by a loving people filled with rich history, culture and tradition as you can see in the video above.

The people of the Maasai tribe welcomed Paula outright and gave her opportunities to contribute. Daily activities usually consisted of taking the cows grazing outside the small village (called a Boma) to allow them to feed the best they could inside of the sun-ravaged lands. Their “grass” looked very much like weeds, and 6-7 hours could easily be spent as the villagers guided the cattle to find more plots of grazable food. They provide on-going support for the Maasai rather than being a source of meat.

This video is something we discuss in the episode… Understand it includes sensitive visuals that may upset some, however, it’s an important piece of the story for the Maasai people who depend on cattle but rarely eat beef.

The differences with beautiful rain-fed pastures at home was beyond striking and animal care is vastly different. In Ireland, there are rarely health issues that lead to cattle deaths, but the experience Paula had with cows dying in Kenya struck her hard. In many cases, there were cattle that had to be helped up and even more that just dropped and couldn’t continue on.

When this happened, she realized that the Maasai tribe members knew that those cows – were destined to die. They were left to the elements and animals – which was an extraordinarily hard experience for Paula who understood the Maasai intensely valued the cattle but had so few choices compared to her farm at home. When water and food are in rare supply and can only be given to the cattle that are making a go of it. Sometimes there is no resource that will save them, and there are no tractors with which to lift them back to their feet. There is only time, and the sad, natural course of events to craft another day in Kenya, and that’s it.

A Chance to Prove Herself

The Maasai Chief had established a series of tasks for Paula, but – believe it or not, she didn’t actually meet the Chief for DAYS, until after Paula was already hip-deep in the experience. The morning tasks were given out each day and the Chief would watch from afar to see what Paula was doing to foster the tasks to completion.

The offering of a hunting knife to Paula caused one of the bits of strife during her experience. You see, only Masai tribesMEN are given this tool to do tasks. This was one of the many “firsts” that Paula was honored with during her journey. Another fine first was put in the books as Paul constructed her own mud hut with the women in the boma called a manyetta. She was able to achieve this after being given a machete with which to chop down the lumber to build the small rudimentary structure. Thankfully, these two tasks were able to quell any problems that the men and or women had with her and the rest of the time spent was beyond amazing.

The differences between a sage Kenyan community, and the ways of life on an Irish dairy farm are vast – but never too far to bridge when hope, knowledge, education and legacy are the ingredients swirling in a wonderful once-in-a-lifetime experience. Be sure to listen to this episode of The Grounded By The Farm Podcast to learn more about Paula’s extraordinary life lesson, adventure an be sure to connect with Paula via her Twitter account @paulahynes4 or Instagram at peterpaulahynes.

Ready to learn what Paula’s Maasai-name is and more importantly – what it MEANS? There’s only one way to find out! Listen to THIS EPISODE of Grounded By The Farm!