Who grew the flowers in that bouquet? Talking Local Flowers with England’s Ben Cross 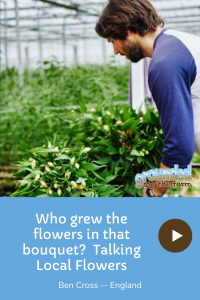 In February, another cold snap hit and I desperately put flowers on my grocery order to simply have a visual reminder that spring would be coming. That bouquet included alstroemeria as many do but I have no idea where they were grown. How cool would it be to buy local flowers or even know the farmer growing them? I met British farmer Ben Cross through Clubhouse (You can find Ben there as @alstroemeriaben and I am @jperson.)

While there are many types of flowers, there is one that not only fosters ongoing warm feelings – its name actually fosters that same thought: The Alstroemeria. And it isn’t just one of the most-beautiful flowers – its the one that we’re going to focus on as we talk to Ben Cross, a fourth generation flower farmer, from Crosslands Flower Nursery! He’s definitely not local for me, but he got me thinking a lot about local flowers.

Nestled near the English Channel, and hour and a half from downtown London, in the Southern parts of the UK, Ben and his family have created a haven for crafting a flourishing fountain of flowery fun. With an area that features the best atmosphere, the best sunlight conditions, The Cross family’s flower farm is the centerpiece for commerce, outstanding scents and visuals that have to be seen to believe.

Ben’s says the farm feature massive greenhouses that specializes and provides the alstroemeria or the “Lily of The Inca” which is a flower that originated in the Andes Mountains of Peru and Chile. The flower is actually named after Darwin’s cousin who was named “Meria.” Ben’s farm was founded back in the 1960s and is based on the bounty that the alstroemeria convey thanks to the surrounding atmospheric conditions that make growing them very straightforward.

In all, Ben’s farm provides 79 different varieties that feature every color you can think of and then some. Their flowers are grown and harvested year-round, and provide some of the largest markets in the UK with fresh new offerings regularly.

Looking for blue and black flowers for your arrangement? Those are the only two colors you won’t find inside the resource listings and flowerbeds of Ben’s flower farm!

Did you also know that alstroemeria’s utilize remarkably LITTLE water? It’s what makes them so sustainable, and with a little care, you can make them last even longer!

While it might sound like heat is the enemy of flowers, Ben and his staff are able to keep their flowers growing and viable all year thanks to the biomass heat that is generated inside their hundreds of greenhouse-based flower beds. While they’ve just finished a Spring time packing run of 13,000 stems in a week, (and another akin to this one in the Autumn/Fall), they actually provide millions of stems annually. From mid-April, they will be continually harvesting stems until Christmastime in December. Even during their “quietest” time, they are still harvesting stems 3 days a week during the months of January and February annually.

Water is the next piece of the flower power foundation in Ben’s operation. Keeping the flowers appropriately hydrated helps to enhance every step of the process. The water is provided to the flowers based on what time of year it is. It can be delivered directly to the stems via their underground irrigation supply feeds during the winter (where the stems can grow to a mind-boggling 7 feet tall!) and then provided from hanging irrigation systems in the summer when the stems are much shorter (usually 2 feet tall).

A few tips to remember to allow your flowers to beatify for longer periods of time include:

1.) Be sure to snip off the leaves on the stem of the flower
2.) Remember to change out the water every 2-3 days to foster longevity
3.) Each time you change out the water, snip a small piece of the step to help prevent the collection of destructive bacteria when showing your flowers
4.) Don’t put your flowers in direct sunlight!
5.) Keep your flowers away from warm electronics – it will kill them quick!

With a little care and attention, you can have an even “longer lasting friendship” (what the actual name of Alstroemeria means in Latin) because you’ll have longer lasting flowers – often up to 2 or 3 weeks!

Can you believe that Ben’s operation only replants about 5% of their crop each year? That’s a tremendous number and fosters the amazing feat of fostering plants that are now between 20 and 30 years old! If only we could have flowers last a fraction of that time, right? It’s an amazing and crafty way to maintain control and costs inside of a business that is literally “always growing!”

Speaking of control – what about BUGS! There are NO PESTICIDES or chemicals of any kind used inside of Crosslands Flower Nursery – Specialists of British Alstroemeria! Instead they are using biocontrols – a way of utilizing biology to kill the unwanted biologies. To learn more about that – you’re going to have to listen to this episode of Grounded By The Farm, to learn what fate awaits those unfortunate White Flies that make their way into the hundreds of flowerbeds in Ben’s massive greenhouses! It’s amazing, it’s biocontrol and it’s SCIENCE at work! 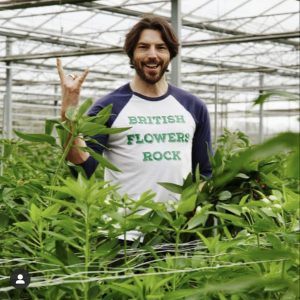 Ben talks about the benefit of buying local, the reduction in the packaging, and carbon footprint of local  flowers globally through a campaign he calls “British Flowers Rock.”

During the year, Ben is often provided with free samples of flower types, to see if he’d like to see about including them in the next season’s harvest. This allows him to have a good look at the varying types, and then “cherry pick” the best that will not only provide for the best yield and look – but also help to flesh out his already robust supply of fragrant flowery fantasticalness.

Inside this episode, Ben shares his grand family legacy that starts with his great granddad and the throughline stories that provide how Ben has become now a fourth generation flower farmer! Growing flowers in the UK is something that continues to be a rare effort but the 4 acres that Ben continues to foster (since its inception in 1936) continue to have grand impact on the eyes, the nose and the hearts of people worldwide.

Are you wanting to be satisfied by flowers, fragrances and the farming of it all? Get satisfied INSTANTLY on Instagram by connecting with Ben Cross and Crosslands Flower Nursery now! Ben is big on the gram, so check out @AlstroemeriaBen on Instagram. He posts lots of video stories, etc.

Be sure to connect with Ben on Twitter, where you’ll see photos, flowers, and fantasticly fragrant things – in 280 characters or less!  Twitter. twitter.com/AlstroemeriaBen

You’ve heard a little bit of what Ben sound like – Listen (AND WATCH!) to more inside a great episode of The Passion podcast youtu.be/ClDhnPLOUls

Unlike most of the guests I have had on, we met on Clubhouse! @AlstroemeriaBen – Be sure to connect with him today and don’t forget that Grounded By The Farm is ALSO on Clubhouse!

Did you know that 90% of flowers in the UK are IMPORTED? That’s a mind-boggling number until you realize that the climate for growing flowers, especially those that need an ongoing, warmer climate – well – The UK isn’t known for it’s long summers and killer beaches but there are some great local flowers!

Do you know how often Ben and his crew water his flowers in the Summer and then again in the Winter? You’ve going to have to listen to this episode of Grounded By The Farm to find out! When you do, be sure to tell us what you think over at our Facebook presence now!
https://www.facebook.com/GroundedbytheFarm

If you are growing alstroemeria, here are Ben’s tips for thinning them so you can plant in more places!

One comment on “Who grew the flowers in that bouquet? Talking Local Flowers with England’s Ben Cross”