Only an episode about growing bitter gourd and other Filipino foods could bring together connections to boxer Manny Pacquiao, pineapple, sugarcane and pig roasts and today is the day! It’s time to talk about all things Filipino food & farming on this episode of the Grounded by the Farm Podcast! (Get the detailed transcript of this episode on Filipino food here.) 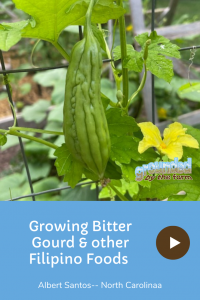 Although rice is probably the biggest constant in Filipino food, there are a variety of foods that many Americans may not be familiar with. And Albert Santos has worked in several areas of The Phillipines studying agriculture and working with plants and people across the way. And he has made sure that I got lots of opportunities to enjoy Filipino food & farms.

Albert is originally from the Philippines but has lived in the US for a long time, though he stays in touch with friends in agriculture there. And he’s brought a lot of Filipino cuisine with him — he even grows a vegetable called bitter gourd (or ampalaya) in his backyard!

Food and farming are and have always been a staple in the Philippines, so much so that there is a piece of cultural song embedded in the minds of many of those from there that link it all together. The song, that features a variety of different kinds of food, instantly binds people to the foods of their native homeland and offers an connection that is unlike anything in other communities across the globe.

What Is Grown in The Philippines?

While we’ve mentioned rice as a staple crop, its emphasis really does have true impact on almost every single meal in The Philippines. In each of the provinces that feature low-lying flatlands you will find rice being grown and cultivated to eventually be placed in the center of an upcoming meal. And the role of the country is significant enough to rate the headquarters of the International Rice Research Institute (I visited IRRI with Albert years ago and learned so much about different kinds of rice!)

Vegetables of all kinds are mostly grown in the mountainous regions and include, cabbage, broccoli, celery and many others. Still other areas feature the growth and harvesting of tomatoes, sugarcane and even others that feature a kind of hemp – that looks like a banana that is used to make ropes for boats and a number of other items. While there is a clear bounty to be found that is grown in the Philippines, there are also Milkfish that are harvested from the wide-ranging coastal waters in the country as well. 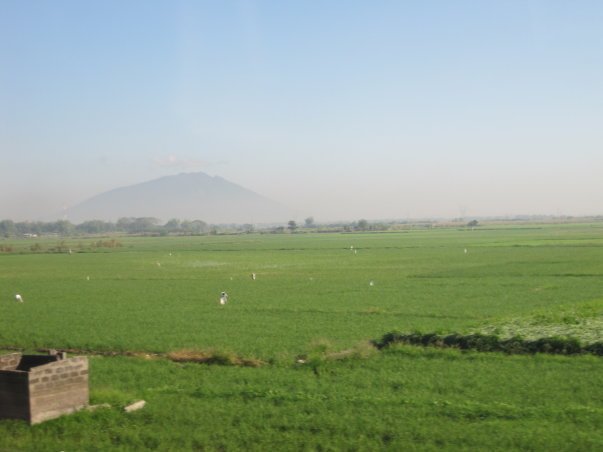 You’ve heard the name of it. You may even know some famous celebrities that made The Philippines home, but – did you know the basics of The Philippines? Find out more than you’ve ever known about this island-based country now!

While there are a huge listing of items that are originally found and grown in the Philippines, what a lot of people are unaware of, is that the Spaniards also brought a variety of items to the volcanic island vista, that has now become a common hub of Filipino food and agriculture, These items include mango and corn, which were actually originally collected in Mexico, then brought to the Philippines! Amazing where the things around us not only come from, but how they are continually transplanted, transformed and take hold inside of completely different cultures!

We talk about a LOT of food inside this episode, but if you’re looking for a comprehensive listing of the Top 50 Delicious Filipino Dishes, look no further than right here!

While thinking of Filipino Celebrities, did you think of – Manny Pacquiao? Well, if you did, then not only have you designated one of the most-popular Filipinos on the planet, you’ve also identified one of the greatest fighters that is from the southern areas of the Philippines. This area of the country is known for it’s development of corn, which many people think is the element that powers the mighty mini-powerhouse of Pacquiao!

This whole time we’ve saved up some of the best for last, which include the eggplant, the bitter gourd, long beans and a very special pumpkin but – to learn about all of THESE? You’re going to have to listen to this episode of Grounded By The Farm!

How many of you like “stinky foods?” While there are many that can hardly stomach ill-smelling foods there are those that say that the pungent aroma makes for a very special “umami” that takes a dish to the next level. From fermented fish to fermented shrimp, Filipino foods feature a variety of scents that will send you in one direction or the other, but will all showcase the diversity of the food palette of the country at every opportunity.

When it comes down to it all, the Philippines and their volcanic origins are the perfect platform for food that has a variety of impacts on people from all walks of life across every continent. Each of the endemic dishes and elements of Filipino food and agriculture present themselves boldly, leaving an impression that will last at least as long as the volcanic rocks that are the literal bedrock of it’s grand, bountiful countrysides,

Did you like what you heard inside this episode of Grounded By the Farm? Be sure to share the link to this episode and interact with us via any of our outlets on social media! All of them are listed and can be connected to over at GroundedByTheFarm.Com!